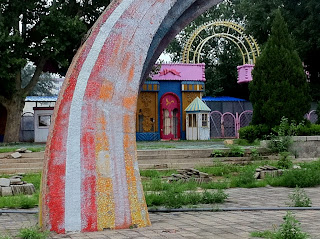 Fascinating collection of photographs of projects in and around Beijing that didn't quite succeed. Wonder what Tom Friedman thinks of these?
Posted by Kirk at 9:51 AM No comments:

SURE TO BE HELPFUL

Japan's Liberal Democratic Party (LDP) policy chief, Sanae Takaichi, has publicly called for her boss, Shinzo Abe, to modify if not repudiate decades of Japanese apologies to its Asian neighbors:

"Mr. Abe should issue a statement that backtracks on some of Japan's previous apologies for wartime actions and "protects the honor and pride" of the nation.

"I look forward, more than anything, to the creation of a new 'Abe statement' that would replace the Murayama statement," Ms. Takaichi said in an interview. She was referring to a 1995 statement by then Prime Minister Tomiichi Murayama to mark the 50th anniversary of the end of World War II that apologized for the damage and suffering Japan inflicted through its colonial rule.

I think I understand some of the "apology fatigue" in Japan. The Murayama Statement, the Kono Statement, and dozens if not more of similar statements have apparently done little to reduce enmity between Japan and its former colonies. So, why keep apologizing?

But at the same time, it is hard to see how openly and directly repudiating past statements helps anything.

And in addition, there's this:

Ms. Takaichi also said Japan's leaders should pay annual visits to the Yasukuni shrine, which honors the country's war dead, including World War II leaders convicted as war criminals. Such visits in the past brought strong protests from China and South Korea.

As of now, the DPRK apparently follows one and only one American on Twitter.
Posted by Kirk at 8:00 AM No comments:

The reaction of the PRC state has been predictable (and fairly traditional).
Posted by Kirk at 9:02 AM No comments: 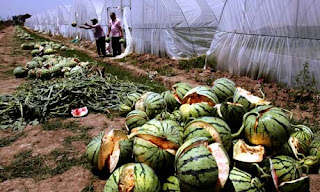 Fields of watermelons exploded when he and other agricultural workers in eastern China mistakenly applied forchlorfenuron, a growth accelerator. The incident has become a focus of a Chinese media drive to expose the lax farming practices, shortcuts and excessive use of fertiliser behind a rash of food safety scandals.

It follows discoveries of the heavy metal cadmium in rice, toxic melamine in milk, arsenic in soy sauce, bleach in mushrooms, and the detergent borax in pork, added to make it resemble beef.