a North Korean short story which warns of the perils of succumbing to the temptations of capitalism is summarized and reviewed by Andrei Lankov. Lankov's conclusion:

The message of this story is simple and easy to understand: Katya is Russia herself, she was lured into a trap by Western propaganda and scheming descendents of landlords, she was fooled into selling her great heritage and she ended up a pitiful prostitute at the bottom of the merciless capitalist heap.

The story is written to serve as a clear warning to North Koreans not to listen to the seductive voices from abroad and should remain on guard against their enemy.

Does this message work? Do reports about Russians suffering under the yoke of capitalism have much impact on North Koreans' vision of the world and themselves within it? Probably it does - at least to some extent, but whether this ideological construct can survive the unavoidable clash with reality is another matter.


Does anyone read or write such obviously didactic literature in the West these days? If not, why not? Have we as a reading audience become so jaded and cynical that we refuse to be moved or persuaded by such literature? Or are we simply unable to come to any consensus about what kind of messages ought to be conveyed?
Posted by Kirk at 2:20 PM No comments:

Enjoys? You be the judge: 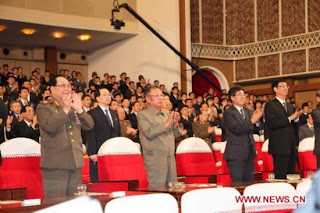 For comparison's sake, go here (or here).
Posted by Kirk at 6:39 PM No comments: