I can't look at these photos and not conclude that I have lived a soft life. 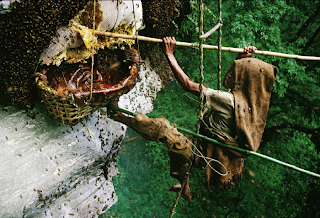 One aspect of the DPRK under Kim Jong Un that is becoming increasingly apparent is a rather nasty and direct tone. No one has ever accused the DPRK of being terribly diplomatic in its propaganda with epithets such as "human scum" and "reptile historians" abounding in the KCNA reports. However, this seems rather tame to the banner that presently sits atop the KCNA website: "Let us cut off the windpipes of the Lee Myung Bak-led swarm of rats" In addition, the KCNA has helpfully included eight cartoons with a common theme. An example: 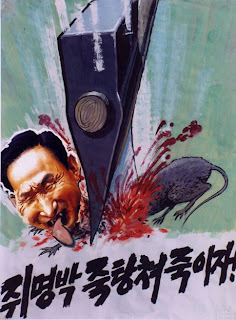 Add to this another KCNA declaration that singled out not only Lee Myunng-bak but also South Korean media outlets such as the Dong-a Ilbo and promised:

Once the above-said special actions kick off, they will reduce all the rat-like groups and the bases for provocations to ashes in three or four minutes, in much shorter time, by unprecedented peculiar means and methods of our own style.

The sum total is somewhat troubling.
Posted by Kirk at 8:43 AM No comments: 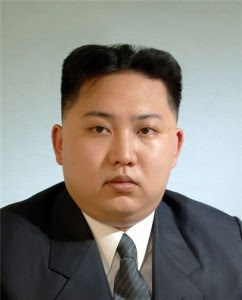 Fascinating stuff from the ever-reliable Aidan Foster-Carter here. Leadership re-shuffling, reading the sartorial tea-leaves (why does Kim Jong Un wear a Western-style suit on occasion?), and this thought-provoking observation:

Observing this, one can only wonder if the hereditary principle is being expanded out from the Kims alone to solidify a wider yangban class in Pyongyang. In the 21st century, on the world’s most dynamic continent, a reactionary reversion to bloodlines in what is supposedly a socialist and meritocratic regime gives scant hope of change, much less progress.

In one fell swoop, Kim Jong Un probably uttered more words in public than his father ever did (English transcript of the speech here).

Two things jump out at me:

1) Ever more emphasis on the importance of the leaders:

Comrades, the great 100-year history of the Kim Il Sung nation is a history that proves the iron truth that dignity and great prosperity of a country and nation exist only when an excellent leader is served.
...
Holding aloft the banner of death-defying defense of the leader before everything else and resolutely defending the lifeline of the chuch’e revolution at the forefront in days of honor and in days of ordeal as well is the greatest exploit of all the exploits that our people’s army has made before the revolution.

2) A celebration of nuclear weapons as the final step in Korea's efforts to be autonomous and independent:

While prided itself on a 5,000-year-old long history and brilliant culture, because it was not under correct leadership and lacked the power to defend itself, the very appearance of our nation a century ago was a small and weak, pitiful colonial nation that had to endure flunkeyism and national ruin as its fate.

However, the 100-year history of the Kim Il Sung nation put a permanent end to the stormy history of suffering, and lifted the dignity of our country and people to the highest state in the history of the nation.

Then or now, there is no change in the geopolitical position of the nation, but the small and weak nation of yesterday – which had been mercilessly trampled upon at each festival scene of the powers – has today changed into a dignified political and military power and our people are displaying dignity as independent people who can never be toyed with by anybody.
...
Military technological supremacy is not a monopoly of imperialists any more, and the time has gone forever when the enemies threatened and intimidated us with atomic bombs.

It is difficult to read such sentiments and not come to the conclusion that the likelihood of a negotiated "solution" to North Korea's nuclear weapons program is rather low.
Posted by Kirk at 10:27 AM No comments:

Apparently that is what the North Korean rocket launch did. Sigh.
Posted by Kirk at 5:10 PM No comments:

BIRDS OF A FEATHER? 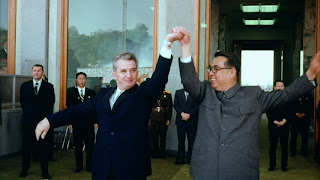 Details on the photo and photographer here.
Posted by Kirk at 2:28 PM No comments: