on the current state and the future of the DPRK.

OK, to be perfectly accurate, it the musings of one wise (and pseudonymous) man, "James Church," author of the Inspector O novels (A Corpse in the Koryo remains my favorite of the bunch) on the writings of another wise man, Rudiger Frank, who recently penned an interesting article, "The Party as Kingmaker..."

What is interesting about the current situation is that, for the first time in more than 50 years, there is in Pyongyang no single, dominant individual at the top to make the final decisions, to resolve different approaches among advisors, to play individuals against each other to keep the system in rough balance.

Read the whole thing.
Posted by Kirk at 2:36 PM No comments:

Some interesting ruminations here. A couple of intriguing snippets:


Kim Jong Il’s funeral committee list offers hints that the Korean Workers’ Party (WPK) might be on the rise somewhat, but it is difficult to imagine it surpassing the army in importance. The military is also well represented on the funeral committee and curiously, Jang Song Thaek—widely regarded as Kim Jong Un’s closest ally—was way down the list in 19th place.

Is "Jang" simply keeping a low profile while remaining comfortably ensconced in his role as regent?

They, and Central Military Commission members, know that they can ill afford to anger the Chinese at such a sensitive time. Whatever internal logic might exist for a military provocation, it probably would not outweigh risking the support that they earned through several trips to China over 2010 and 2011. It would endanger the very political order they are trying to secure.

News media has a stake in conflict, so the thematic emphasis has been very much about the potential for instability. Right now, though, quiet is in everybody’s interests. Most of all, for the North Korean leadership.

And I take it this funeral will not be attended by Western leaders?

That's right; it's all just a domestic affair. No foreign leaders invited.


It is interesting to contemplate how this squares with the consistent DPRK propaganda that emphasizes the global stature and status of the Kims. Perhaps the KCNA will inform us that grieving world leaders expressed their desire to come but couldn't make it because of bad weather?

Kim Jong Il did not live long enough to even enjoy his elevation to Number One Dictator in Parade Magazine’s December 18 edition.

The consequences for Kim Jong Un because of his father’s abrupt death will be dire. He has virtually no practical experience, no individual power base and a system newly designed to weakly function after Kim Jong Il as check and balance between the military, the party and a regent (Jong SongTaek, Kim Jong Il’s brother-in-law). The problem is that Kim Jong Il elevated the military through his Military First Policy to the point where it is THE power in North Korea and efforts to share power can only come through the diminution of the military – something it will not accept in the mid- to long-term.


One of the many video clips of a mourning DPRK population


Much more of the same here

And, for comparison's sake, the reaction when Kim Jong Il's father died:

It appears as if the DPRK doesn't care much for displays of Christmas lights along the DMZ. 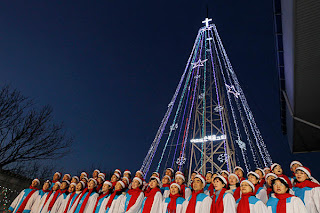 UPDATE: A suggested DPRK response here.
Posted by Kirk at 11:16 AM No comments:

LEARN SOMETHING NEW EVERY DAY

Saw this photo of some ROK postage stamps celebrating the fact that South Korea enjoyed one trillion dollars' worth of foreign trade (found here). 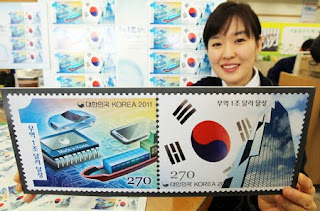 This made me realize that I have never known or used the Korean word for "trillion" (조, 兆) before. I think this is at least in part because a trillion simply hasn't been a number that has had much in the way of real-world examples or applications until recently.

Remember when the IMF bailout of $57 billion was an unprecedentedly astronomical amount? Those were the days.
Posted by Kirk at 8:44 AM No comments: