We have become accustomed to North Korea watchers reaching conclusions based on cryptic official statements, who is sitting next to whom at the latest government meeting, grainy satellite photos etc.

Here's a new source (at least for me): Middle school bathroom graffiti

The lyrics of a children’s song satirizing Kim Il Sung, Kim Jong Il and Kim Jong Eun have been found in a classroom and the restroom at Osandeok Senior Middle School.”

The children’s song is a well-known one in South Korea called “Three Bears.”

The re-written lyrics of the song, NKIS claims, are as follows: “Three bears in a house, pocketing everything; grandpa bear, papa bear and baby bear. Grandpa Bear is fat, Papa Bear is fat, too, and Baby Bear is a doofus.”

Even though when singing the song the Kim family members are not named, a short glance reveals the song’s satirical nature, leading the authorities to reportedly treat it as a reactionary element and investigate its origin.

Make of this what you will.

UPDATE: here is another example of P'yôngyangology but done much more carefully and with a cautious warning in the conclusion:

I suggest we use this example both as an etude in the anecdote-based Pyongyangology, and as a warning of how easy it can be to derive far-reaching conclusions from questionable evidence. Do we need culture-specific expertise? Obviously, we do. Otherwise, we risk basing policy decisions on a hoax. 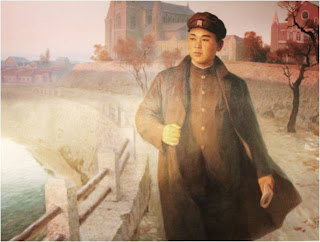 Kim Jong Un in Europe? Perhaps not.
Posted by Kirk at 8:04 AM No comments:

He's quite good at that.

I doubt this collection of photos is comprehensive. But it does include one of my favorites which I noted earlier here. 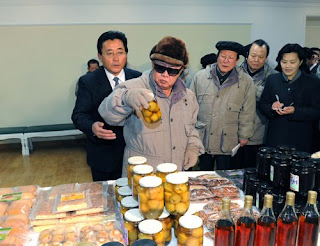 AN EYE FOR AN EYE?

South Korea would carry out immediate airstrikes on North Korea in the event of further aggression from its neighbour, the man appointed Seoul's new defence minister said Friday.

The military would 'soundly strike back to ensure that the enemy could no longer provoke us', Kim Kwan Jin said at his confirmation hearing in parliament, adding that such strikes would 'definitely' include airstrikes.

I agree with many who have become frustrated if not fed up with the DPRK and its confidence that it can provoke with impunity. This is particularly the case when lives are lost.

And yet I can't help but think that it would be better to not just strike back "soundly" but also strike back smartly (if that's a word). Are we so narrow-minded that the only conceivable retaliation to a military strike is a military strike? Rather than giving the military-first regime what it wants/needs, why not hit it where it really hurts?

The two areas that the DPRK has appeared to react most angrily and stridently about (and in ways that appear to be out of proportion to the apparent harm done) are when the outside world imposes banking sanctions which makes it difficult for the regime to get cash (think Banco Delta Asia; a huge fuss was made by P'yôngyang over what was really not that much money) or when outsiders engage in propaganda warfare. So why not promise (and then deliver) on a full-scale propaganda barrage (loudspeakers, balloons, radio broadcasts, DVDs) that will follow any DPRK hostile act? Bradley Martin thinks this is a great idea.

A stepped-up campaign of providing accurate news about their own country and the rest of the world to a people who are no longer hermetically sealed off from such news could over time threaten the regime’s domestic control.

Think of some recent North Korean policy decisions and how easy it would be to dissect them in unbiased fashion and show the leaders up for the self-seeking incompetents that they are.
Members of the North Korean public would hardly be able to get enough news and analysis regarding, for example, the ongoing effort by the authorities to cut off the legs of the spontaneously developed market economy, which is many people’s only means of avoiding starvation following the failure of the state-run economy.

Such propaganda attacks would have the added benefit of potentially dividing North Korean society rather than uniting it as bombing would almost surely do.

Why not give this a try? What am I missing here?

"Thinking asymmetrically, the South needs to attack the North in the two areas where it is most vulnerable - international finance and the truth about its rulers. South Korea, Japan and the U.S. should further shut down North Korea’s overseas assets and financial channels. Even food aid needs to be placed entirely on China’s doorstep. The South should release at sea propaganda balloon barrages aimed at Pyongyang."