MIND-BLOWING DEMOGRAPHIC STAT FOR THE DAY

The migrant population has an average monthly income of around 1,900 yuan and most of them are engaged in high-risk industries, the report shows. They can not fully enjoy social security and public services.

The social and economic implications of this are astounding!
Posted by Kirk at 10:26 PM No comments:

So says the Obama administration.

Obama administration officials say they will closely monitor North Korean activity for signs of a return to international terrorism. But they say they consider the sinking of the South Korean warship the Cheonan to have been a military-against-military operation and not an act of terrorism

.I agree. One doesn't have to condone the sinking of the ship to conclude that a military attack even if covertly done is not quite the same as "terrorism." The DPRK regime has done any number of objectionable things of late, but the last act that clearly falls within a conventional definition of terrorism was the 1987 KAL bombing (an event that always gives one an excuse to invoke the story of Kim Hyôn-hûi, the North Korean "Jane Bond" who is thought to have carried out the attack (photo below). 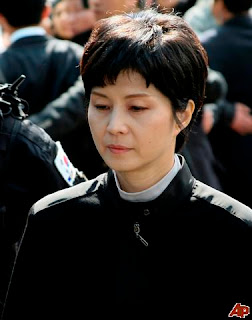 Anyway, to call the sinking of the Cheonan "terrorism" robs the latter of any real meaning above and beyond the idea of "doing something bad that we don't like."
Posted by Kirk at 10:16 PM No comments:

No matter what you call it, 6.25 (as in June 25th) marks the anniversary of the full-scale beginning of a terrible, devastating war.

The Korean peninsular has been fortunate that--border raids, bombings and naval clashes notwithstanding--it has experienced nearly six decades of peace following the Korean War. We can only hope that this trend continues in the future.

Some interesting (color) pictures of the Korean War here.
Posted by Kirk at 9:26 AM No comments: 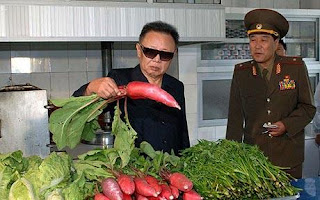 The title of this award-winning journalism? Kim Jong-il inspects radish at army camp.

UPDATE: Of course this could all be part of a DPRK domestic disinformation campaign aimed at Kim Jong-il himself.

Radishes and eggs: I'm getting hungry.
Posted by Kirk at 10:41 AM No comments:

Over the last four years, the 58-year-old Clark has travelled around the globe to watch North Korea play their World Cup qualifiers — even taking in games in Pyongyang during a organised tour.

"I was present when the Chollimas qualified for the World Cup following their draw with Saudi Arabia in Riyadh," said Clark, who is British.

"I was the only North Korean fan in the ground and was surrounded by 65,000 Saudi supporters as I waved my DPRK flag and cheered."

I wonder what Mr, Clark thought of today's lopsided match with Portugal?

UPDATE: Mr. Clark has got to be better than the Chinese "volunteers," allegedly imported to cheer for the DPRK. At least he comes by his support for the DPRK honestly.

UPDATE II: It turns out that the North Koreans aren't the only ones who hire foreigners to make appearances.
Posted by Kirk at 1:37 PM No comments:

Intrigued by the "baby riots" of 1888 (anti-foreign demonstrations in Seoul motivated by rumors that foreigners were stealing and eating Korean babies), I have had an abiding interest in cannibalism and especially stories, rumors, urban legends about such.

Therefore, I couldn't help but be intrigued when the following version of the "Nigerian e-mail hoax" crossed my in-box: