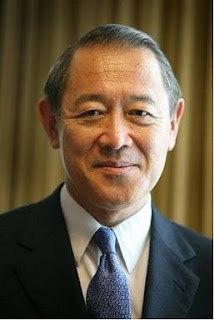 Japan's Ambassador to the U.S., Ichiro Fujisaki addressed a packed conference hall at lunchtime today. He displayed some impressive public diplomacy skills, skills that are amazingly in all too short of supply among the ranks of the diplomatic corps. He was quick to insert comments about BYU beating Air Force (complete with a rueful worry that perhaps Japan's trust in the USAF is misplaced), Real Salt Lake's soccer victory, BYU's religious climate, Mormon missionaries, and on and on.

He also did an impressive job of conveying a much needed reminder of the benefits of a close U.S.-Japan relationship, for reasons both old and new. He also was deft and diplomatic (as well he should be given his choice of profession) about sticky issues such as U.S. military bases in Okinawa.

BYU students, all in all, acquitted themselves well, asking well-informed questions and even managing to sneak in a joke or two.
Posted by Kirk at 1:42 PM No comments:

photos of pollution in China.
Posted by Kirk at 12:50 PM 1 comment:

really. Well, not exactly. This appears to be run by an Austrian fan (?) of P'yôngyang. Still, if you can't get enough of KCNA headlines, this twitter feed is for you.

Example: Rodong Sinmun on U.S. Policy of Hegemony on Verge of Bankruptcy
Posted by Kirk at 9:05 AM No comments: