Here is some guy talking about political cartoons and taking North Korea seriously
Posted by Kirk at 8:59 AM No comments:

Designed for men, many of these guy purses often known as shou bao in Mandarin would be right at home in the women's handbag section of an upscale department store. Popular styles include the oversize wallet with wraparound zippers like Zhang's and the embossed leather Coach handbag with the slinky shoulder strap and handles. Colors trend toward solid brown, black and gray. But some fashion-forward gents don't mind showing a little flash: Burberry plaid, Gucci's interlocking GG pattern or Louis Vuitton's distinct LV monogram.

Men represent 45% of the $1.2-billion market for all luxury handbags in China, according to Victor Luis, president of Coach Retail International. That figure is just 7% in the U.S. 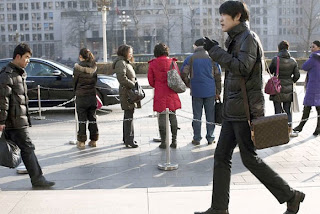 Perhaps all of those "European carry-all" jokes will have to be re-written for the 21st century.
Posted by Kirk at 11:44 AM No comments:

He's focusing on Egypt and the Arab authoritarian states in the Middle East, but might the same concepts be applied to North Korea?

I think that the factor of indignity and shame, of the sort manifested in the anecdote above, makes a more satisfactory initial explanation. And one of the cheering and reassuring things about dictatorship is the way that it consistently fails to understand this element of the equation. How gratifying it is that all such regimes go on making the same obvious mistakes. None of them ever seems to master a few simple survival techniques: Don't let the supreme leader's extended family go on shopping sprees; don't publicly spoil some firstborn as if the people can't wait for him, too, to be proclaimed from the balcony; don't display your personal photograph all over the landscape; don't claim more than, say, 75 percent of the vote in any "election" you put on. And don't try to shut down social media: It will instantly alert even the most somnolent citizen to the fact that you are losing, or have lost, your grip.

People do not like to be treated like fools, or backward infants, or extras in some parade. There is a natural and inborn resistance to such tutelage, for the simple-enough reasons that young people want to be regarded as adults, and parents can't bear to be humiliated in front of their children.

Is North Korea the exotic Oriental exception to this rule? Or has the DPRK regime been successful in fusing the natural desire for dignity that Hitchens mentions with the dignity of the state (nation/regime/race) in a way that other despotic regimes can only envy?
Posted by Kirk at 9:50 AM No comments: