Niall Ferguson thinks he has a couple to share: First is the notion that change, especially decline and collapse can come on suddenly:

Yet what if history is not cyclical and slow-moving but arhythmic, at times almost stationary, but also capable of accelerating suddenly, like a sports car? What if collapse does not arrive over a number of centuries but comes suddenly, like a thief in the night?

Does this fit the case(s) of East Asia? I suppose one could make the argument that the collapse of the Ming was relatively rapid. Ken Swope makes a good case for the argument that the Ming remained a formidable and impressive military power at the end of the 16th century. But should the resultant slide to ruin which took 44 years to reach its end be regarded as "sudden"? Most would argue that the decline of the Qing was at least a multi-decade process. Chosôn Korea? Again, it depends in when one determines signs of decline began.

Lesson #2: the threat of debt:

What are the implications for the US today? The most obvious point is that imperial falls are associated with fiscal crises: sharp imbalances between revenues and expenditures, and the mounting cost of servicing a mountain of public debt.

Think of Spain in the 17th century: already by 1543 nearly two-thirds of ordinary revenue was going on interest on the juros, the loans by which the Habsburg monarchy financed itself.

Or think of France in the 18th century: between 1751 and 1788, the eve of Revolution, interest and amortisation payments rose from just over a quarter of tax revenue to 62 per cent.

Finally, consider Britain in the 20th century. Its real problems came after 1945, when a substantial proportion of its now immense debt burden was in foreign hands. Of the pound stg. 21 billion national debt at the end of the war, about pound stg. 3.4bn was owed to foreign creditors, equivalent to about a third of gross domestic product.

Alarm bells should therefore be ringing very loudly indeed in Washington, as the US contemplates a deficit for 2010 of more than $US1.47 trillion ($1.64 trillion), about 10 per cent of GDP, for the second year running. Since 2001, in the space of just 10 years, the federal debt in public hands has doubled as a share of GDP from 32 per cent to a projected 66 per cent next year. According to the Congressional Budget Office's latest projections, the debt could rise above 90 per cent of GDP by 2020 and reach 146 per cent by 2030 and 344 per cent by 2050.

These sums may sound fantastic. But what is even more terrifying is to consider what ongoing deficit finance could mean for the burden of interest payments as a share of federal revenues.

Did debt bring down Asian regimes? It is apparent that the late Ming, late Qing and late Chosôn all had serious fiscal problems (I don't have a good sense of whether this was the case in Tokugawa Japan). But was debt the disease or merely a symptom of an underlying malaise?

Whatever the case, it is difficult to not look at the U.S.'s present fiscal straits with some alarm (presuming one wishes to see the U.S. remain in existence).
Posted by Kirk at 9:41 AM 1 comment: 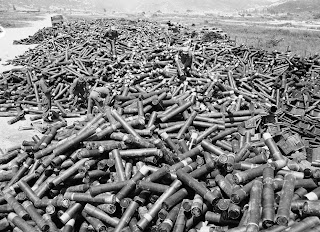 You may have seen many of these photos already, but worth a look: the always fascinating "Big Picture" feature at Boston.com has a nice collection of Korean War photos.
Posted by Kirk at 9:17 AM No comments:

WISH I WOULD HAVE READ THIS EARLIER

Just stumbled across a passage from the late-Qing/early Republican thinker Liang Qichao in which Liang seeks to describe what he sees as the "new" imperialism of the West (and Japan):

Aside from the last case of "assisting revolution," every other practice on Liang's list of the acts of the "new" imperialists can be seen in the Qing Empire's own relations with Korea in the last half of the 19th century. Would have been nice to use this in my book.
Posted by Kirk at 4:57 PM No comments:

or plausible ones at least:

But then there are some shows that go completely beyond the pale of enjoyability, until they become nothing more than overwritten collections of tropes impossible to watch without groaning.

I think the worst offender here is the History Channel and all their programs on the so-called "World War II".

Let's start with the bad guys. Battalions of stormtroopers dressed in all black, check. Secret police, check. Determination to brutally kill everyone who doesn't look like them, check. Leader with a tiny villain mustache and a tendency to go into apopleptic rage when he doesn't get his way, check. All this from a country that was ordinary, believable, and dare I say it sometimes even sympathetic in previous seasons.

I wouldn't even mind the lack of originality if they weren't so heavy-handed about it. Apparently we're supposed to believe that in the middle of the war the Germans attacked their allies the Russians, starting an unwinnable conflict on two fronts, just to show how sneaky and untrustworthy they could be? And that they diverted all their resources to use in making ever bigger and scarier death camps, even in the middle of a huge war? Real people just aren't that evil. And that's not even counting the part where as soon as the plot requires it, they instantly forget about all the racism nonsense and become best buddies with the definitely non-Aryan Japanese.

HT Instapundit.
Posted by Kirk at 9:01 AM No comments: