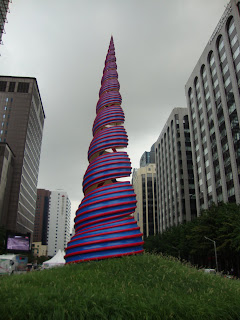 To denizens of Seoul, this thing that towers above one end of then-Seoul mayor's Lee Myung-bak's Ch'ônggye Stream restoration project is old news. But this past summer was the first time I had seen the thing with my own eyes. As I walked around it I wondered what on earth this had to do with the stream that was old and then new again, with Seoul, or with Korea.

The caption beneath it offered some help: 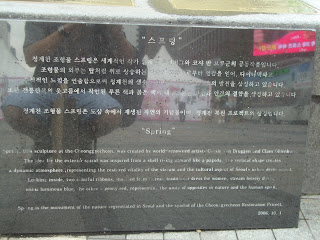 Hmmmm.... Once I was aware of the Oldenberg connection, I couldn't help but think of this. I wonder if the now wizened old Swede laughed all the way to the bank or if he took/takes this stuff seriously.
Posted by Kirk at 1:50 PM No comments:

Korea has seen “unusual” weather, such as heat wave, record rainfall and early frost, in September.

The first frost of the season was spotted on Mt. Seorak in the country's east on Friday, 11 days earlier than last year and amid a series of abnormal weather conditions this month, according to local forecasts.

In an earlier era, this might be taken as a sign of dynastic decline, even a loss of the Mandate of Heaven (hmmm.... I wonder if these weather anomalies have been observed north of the 38th parallel too?). At least there has been no sign of dragons, (pace Tim Brook's excellent new book, The Troubled Empire).... yet.
Posted by Kirk at 10:30 AM No comments: 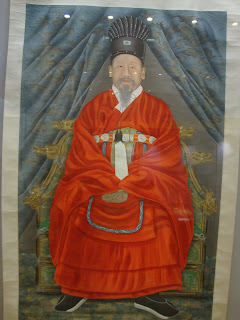 While in Korea a week or so ago, I was able to see exhibits on the Great Han Empire Period (1897-1910) at both the National Palace Museum of Korea and at the Kyujanggak.

Of course you can't have an Empire without an Emperor, in this case the Kwangmu (Gwangmu) Emperor, more often known as Kojong. Technically, calling him (as the English-language Wikipedia page does) "Emperor Gojong" is inaccurate as Kojong was his royal title (or reign period) while he was king. He was elevated to Imperial status as the Kwangmu Emperor (광무제) in 1897.


Whatever the case, he is an interesting and complicated historical figure. I like this portrait of him (apologies for the glare coming off the glass) but don't feel as if I really have a sense of what kind of man and/or leader he was. On the one hand, many so-called progressives and reformers put great stock in his ostensible desire for reform and modernization (some Westerners agreed). On the other, there is much in his behavior that displays a cautious if not reactionary streak (suppression of the Independence Club comes to mind).

Good Confucian historiography requires that the moral failings of the last monarchs of a realm are directly responsible for that realm's fall (due to the loss of the Mandate of Heaven). Hence, Kojong/Kwangmu (and his son the hapless Emperor Sunjong) should be blamed for the fall of Korea into Japanese hands. I don't think things are/were quite that simple. I'm not sure whether the most dynamic and righteous leader could have found a path out of colonization.
Posted by Kirk at 1:00 PM No comments:

WHO SANK THE CHEONAN? (II)

Apparently part of an ongoing series.

As I have noted previously (here and here), there have been some who have disputed the findings of the "official" report that blames the sinking of the ROK naval vessel on a North Korean torpedo. Well, it turns out that, in South Korea at least, such skepticism is widespread:

Only three out of 10 South Koreans trust the findings of an international inquiry into the sinking of the Navy corvette Cheonan that blamed a North Korean torpedo attack.

According to a survey conducted by Seoul National University's Institute for Peace and Unification Studies, 32.5 percent of respondents were more or less convinced, saying they "completely trust" (6.4 percent) or "tend to trust" (26.1 percent) the findings of the inquiry.

But 35.7 percent of respondents were not convinced, with 10.7 percent saying they "completely distrust" and 25 percent they "tend to distrust" the findings. The remainder said they did not know.

I think I am on safe ground when I opine that this survey tells us more about how most South Koreans view the Lee Myung Bak government (and perhaps governments in general) than it tells about most South Koreans' knowledge of underwater physics, naval weaponry etc.

Still, quite interesting.
Posted by Kirk at 12:55 PM No comments: 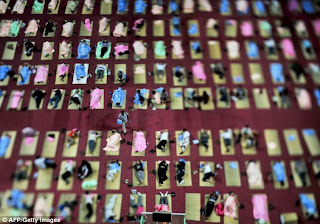 
Greeting me upon my arrival at Inch’ôn/Incheon International Airport a couple of weeks ago were some huge posters featuring a suave and debonair Pierce Brosnan seeking to lure me to one Paradise Casino. His image, flanked by several attractive women, was part of a similar ad that was on the cover of the latest edition of the Seoul Tourist Map (English edition; apologies for the blurry photo).

1) How much Photoshop? I suspect that Mr. Brosnan didn't need to pose with the ladies but rather had his image electronically added to the scene. I wonder whether he even needed to pose holding the Ace of Spades or is this photoshopping magic too?

2) Is Pierce aware that his image is being used in this way? I suspect, given the internationally-oriented nature of the ads, he would have to be. Of course Western celebs in Asian ads is hardly new.

3) Is this ad effective? I don't suppose that many actually believe that if they venture to the Paradise Casino they might find Mr. Brosnan (or Mr. Bond for that matter) at the Blackjack table. So what, then, is the payoff? Brand/name awareness? If so, aren't their cheaper ways to accomplish this?
Posted by Kirk at 12:05 PM No comments:

IF AT FIRST YOU DON'T SUCCEED...

Keep trying, yes. But, 960 times?
Sounds as if we are in need of updating the old proverb "칠전팔기(七顚八起)"
Posted by Kirk at 8:54 AM No comments: