Part of a recurring series.

DPRK watchers conclude that they have found evidence of the elevation of Kim Jong Un to the same status of his father. 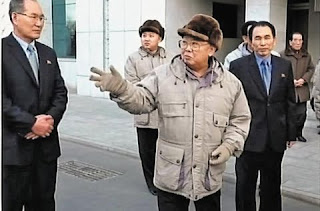 North Korean leader Kim Jong-il's son and heir Jong-un is already being treated with the same level of protocol as his father.

A senior South Korean government official last Friday said Kim Jong-un seems to have moved up to the same rank as his father. "The most conspicuous sign is that Kim Jong-un has started wearing a top-quality furry hat that only Kim Jong-il has been wearing so far," the official added.

UPDATE: Jonathan Dresner, always reliable for thoughtful and erudite commentary, notes that in this case the P'yôngyang-ologists are "likely to be right." Indeed, they may very well be. But even so, it is an interesting commentary that something which is so mundane and common in the West (at least in the cold parts) could be recognized as a sign of power and authority in the DPRK. I wonder whether prepared-for-the-cold foreign visitors are required to hand over their furry hats if they too closely resemble those of the Kims?
Posted by Kirk at 6:17 AM 1 comment:

Not exactly, but some of the similarities are striking:

Confucian followers are fighting against a government-sanctioned plan to build a 41-meter-high Gothic-style church with seating for 3000 worshippers in Qufu, Shandong – the birthplace of Confucius – arguing that it threatens Confucianism’s status in China. A petition calling for a halt to the project posted on the Confucian website Chinarujiao.net received 572 signatures and support from 77 Confucian groups. “If a super-large Confucian temple were built in Jerusalem, Mecca or the Vatican, pitting itself against existing religious buildings there, how would the local people feel about it?” said the petition, which has been widely circulated online.

I have often noted that academia often appears to adhere to a code of civility in reviewing colleagues' books: politely point out a error of fact here, a disagreement there, but don't savage a colleagues' book because you might be next. Dr. Jacoby doesn't feel compelled to honor this unwritten code:

In a blurb, Michael Burawoy, a previous president of the American Sociological Association and a prominent leftist sociologist, calls the book “encyclopedic” in its breadth and “daunting” in its ambition. He states, “Only a thinker of Wright’s genius could sustain such a badly needed political imagination without losing analytical clarity and precision.” With the correction that Wright is no genius and that the book is suffocatingly narrow in scope, impossibly cramped in imagination, and irreparably muddy in execution, the blurb is accurate.

While I can't speak to the veracity of this scathing critique, a part of me finds it rather refreshing (if somewhat frightening).
Posted by Kirk at 1:19 PM 1 comment:

"APPEASEMENT, YOUR HOUR HAS COME"

So says Ambrose Evans-Pritchard (could a more British-sounding name be imagined?).

He invokes the historical precedent of pre-WWI Europe:

Is China now where Germany was in 1900? Possibly. There are certainly hints of menace from some quarters in Beijing. Defence minister Liang Guanglie said over New Year that China’s armed forces are “pushing forward preparations for military conflict in every strategic direction”.

Professor Huang Jing from Singapore’s Lee Kwan Yew School and a former adviser to China’s Army, said Beijing is losing its grip on the colonels.
“The young officers are taking control of strategy and it is like young officers in Japan in the 1930s. This is very dangerous. They are on a collision course with a US-dominated system,” he said.

The correct statecraft for the West is to treat Beijing politely but firmly as a member of global club, gambling that the Confucian ethic will over time incline China to a quest for global as well as national concord.

A column in the Chosun Ilbo calls for South Korea to acquire nuclear weapons:

Only when Seoul develops a nuclear bomb will the way for substantive negotiations between the two Koreas open. Paradoxically, denuclearization is possible on the Korean Peninsula only when both Koreas have nuclear arms, exercise mutual restraint and conduct nuclear disarmament talks. We can no longer entrust our lives and territorial security to the incompetence of world powers that have failed to settle the North Korean nuclear issue for over two decades. We have to take charge, and to do that we need to develop nuclear weapons.

Because of course North Korea won't see any increased threat to its own security or existence by a nuclear-armed South Korea.
Posted by Kirk at 8:20 AM No comments:

photos of the ghost town known as Detroit. Compare these images with Seoul or Beijing. Discuss....
Posted by Kirk at 7:46 AM No comments: