TWO RATHER DIFFERENT VIEWS ON THE CHEONAN

One, written by Christopher Hitchens, argues that if any regime deserves the appellation "evil, it is North Korea.

So this is the way we live now: conditioned by the awareness that no North Korean provocation, however egregious, can be confronted, lest it furnish the occasion or pretext for something truly barbarous and insane.

The other, written by a previously-unknown-to-me Stephen Gowans, argues that the real culprit is to be found south of the 38th parallel.

Lee is a North Korea-phobe who prefers a confrontational stance toward his neighbor to the north to the policy of peaceful coexistence and growing cooperation favored by his recent predecessors (and by Pyongyang, as well. It’s worth mentioning that North Korea supports a policy of peace and cooperation. South Korea, under its hawkish president, does not.) Fabricating a case against the North serves Lee in a number of ways. If voters in the South can be persuaded that the North is indeed a menace – and it looks like this is exactly what is happening – Lee’s hawkish policies will be embraced as the right ones for present circumstances. This will prove immeasurably helpful in upcoming mayoral and gubernatorial elections in June.

As noted previously, I don't put much stock in conspiracy theories. I would also have a hard time reconciling the images below (urging the North Korean people to become "human bombs" and threatening to "eliminate America from the earth") as any more consistent with a "policy of peace and cooperation" than are Lee Myung-bak's recent declarations. 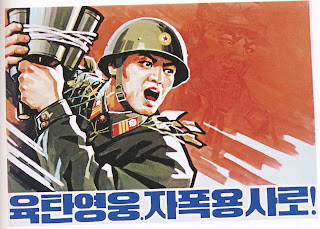 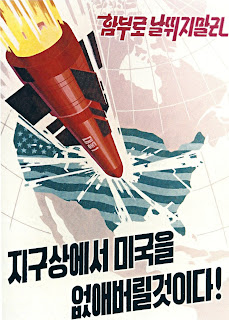 Do you think it's clear to Kim & co. just how many South Korean soldiers, airmen and sailors he can kill without triggering the war that no one wants? He got 46 this time; had the ship's entire crew of 104 been killed, would the reaction from Seoul and its friends be any different? (Hint: No.)

So what's the answer? If not 46 or 104, is it 460? Or 4,600 perhaps? What's the red line that Kim Jong Il cannot cross without eliciting something more than yet another round of economic sanctions from the U.N. and an inter-Korean trade embargo that doesn't really put an embargo on inter-Korean trade? I bet he doesn't have a clue. And that's what's scary.

I suspect that, if past performance is any indication, the DPRK leadership knows full well that provocations, even those that result in significant numbers of deaths--1968 Blue House raid, Pueblo incident, ax murders, Rangoon bombing, bombing of KAL 858, numerous clashes along the NLL, shooting of a tourist at Geumgang etc. etc.--will not result in a significant military escalation on the part of the ROK (or the U.S., Japan etc.). The real question is less what the DPRK will do and more whether the ROK has finally had enough and will escalate.
Posted by Kirk at 10:18 AM No comments:

WHO SANK THE CHEONAN?

For those who can't enough of conspiracy theories, I give you this: "Who Sank the South Korean Warship Cheonan? A New Stage in the US-Korean War and US-China Relations"

Anyone who has paid any attention to the various 9/11 conspiracy theories will, I trust, see the similarities and parallels here (a good start on refuting the 9/11 madness can be found here).
Posted by Kirk at 9:05 AM No comments:

DPRK AT THE SHANGHAI EXPO

A brief and not terribly informative piece on the North Korean pavilion at the Shanghai Expo here.

Inside, visitors crowd one another to pose in front of a 15-foot tall model of the Pyongyang monument, Juche Tower. Juche is the ideological principle developed by DPRK founding father, Kim Il-Sung. There's also a miniature bridge over a reproduction of Taedong River, a Korean-style pavilion, and several TV monitors showing footage from the Korean War, national parade excerpts, ordinary life, athletic events, and scientific achievements.

Associated video here. Note how the poor DPRK citizen tasked with stamping the "passports" of expo visitors doesn't want to be caught on camera.

Official website of the DPRK pavilion here.
Posted by Kirk at 12:01 PM No comments:

CHINA FACT OF THE DAY

Thanks to Tyler Cowen

China alone loses between 100 million and 200 million tons of coal each year to mine fires, as much as 20 percent of their annual production, according to the International Institute for Geo-Information Science and Earth Observation, based in Enschede, Netherlands. The Institute estimates that carbon dioxide emissions from these fires are as high as 1.1 billion metric tons, more than the total carbon dioxide emissions from automobiles in the United States. Second to China is India, where 10 million tons of coal burns annually in mine fires, contributing a further 51 million metric tons of carbon dioxide to the atmosphere.

A fascinating article in the Atlantic Monthly by NYT reporter, photographer, and sometimes China-watcher Howard French.

There is plenty worth reading and considering, but one of the things that jumped out at me is how the PRC and the Chinese people are, in many ways, behaving just as we might expect imperialists to behave, complete with calls for settlers:

“Chongqing is well experienced in agricultural mass production, while in Africa there is plenty of land but food production is unsatisfactory…Chongqing’s labour exports have just started, but they will take off once we convince the farmers to become landlords abroad”--Li Ruogu, head of China’s Export-Import Bank in the South China Morning Post:


and condescension toward the natives:

“’If you gave this land to Chinese people to work it, this place would be rich overnight,’ said one Chinese woman immigrant, a middle-aged trader in southern Congo: ‘They’re too lazy, these Africans’”

Given the main argument of my recent book, I am not terribly surprised to find the Chinese acting like imperialists. I should hasten to make what should be the obvious point that China is far from unique or exceptional in this regard.

Of course, from the perspective of Africa, whether the imperialists are Chinese or Western doesn't really matter all that much. A Congolese lawyer sums it up nicely:

“’The problem is not who is the latest buyer of our commodities,’ he replied. ‘The problem is to determine what is Africa’s place in the future of the global economy, and up to now, we have seen very little that is new. China is taking the place of the West: they take our raw materials and they sell finished goods to the world…What Africans are getting in exchange, whether it is roads or schools or finished goods, doesn’t really matter. We remain under the same old schema: our cobalt goes off to China in the form of dusty ore and returns here in the form of expensive batteries”

Photo essay on areas in China where Mao is still revered.

Below is a brewery in Nanjie, a village that re-collectivized when the rest of China was moving to the market and which makes a living largely from tourists (mostly Chinese) who come to see the quaint place where the Chairman still reigns supreme. Another collection of photos in Nanjie can be seen here. 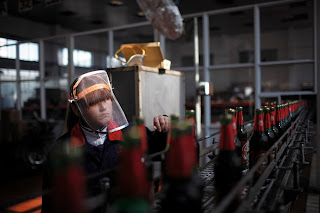 While the poster in this "Mao Hotel" clearly declares that Mao is/was but a man and not a god, one can't help but wonder whether we're seeing the first stages of a Guandi (or Guan Yu)-like deification here. 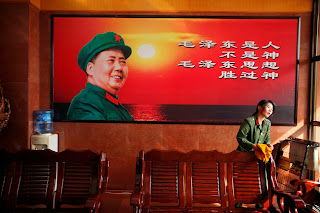