ostensibly traditionally Korean (though probably owing at least some to the period of Japanese colonial rule) and "modern" and globalized all mixed together in one image (courtesy of Robert Koehler). 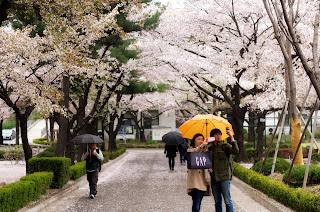 sometimes the result is unexpectedly good.
Posted by Kirk at 7:58 AM 1 comment:

is back (more here)!

Interesting photo and analysis over at Foreign Policy. Worth a quick look. 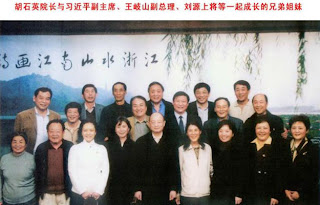 in a Chinese airport
Posted by Kirk at 8:54 AM No comments: 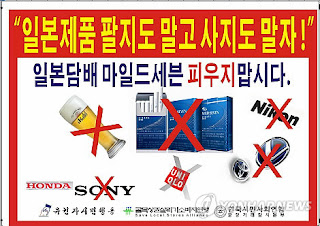 Discouraging the purchase of Japanese (or other foreign) goods has a long and storied history which extends back at least to the "Korean Products Promotion Society" of Cho Man-sik.

I seem to recall posters in the 1980s calling for boycotts of American cigarettes (which cause cancer) and American beef.

Then again in the late 90s, there were renewed calls for the consumption of Korean goods rather than foreign goods (one poster declared that Kim Ku smoked Korean tobacco; so should you).
Posted by Kirk at 8:43 AM No comments:

for the day: "Use caution when eating escolar." Graphic warning ahead:

To be frankly and bluntly specific - and I'm sorry for this - consumption of escolar causes explosive, oily, orange diarrhea. People have reported that the discharges are often difficult to control and accidents can happen while passing gas. I personally know someone who ate an escolar steak one night, unaware of its side effects. The next day he was riding the elevator to his office when out of nowhere his bowels unleashed a surprise attack on his pants. As he said later, "Thank God I had my gym bag with me, which had a clean pair of underwear in it." This explains why escolar is also called the "olestra fish" and the "ex-lax fish."

Shudder
Posted by Kirk at 8:45 AM No comments: